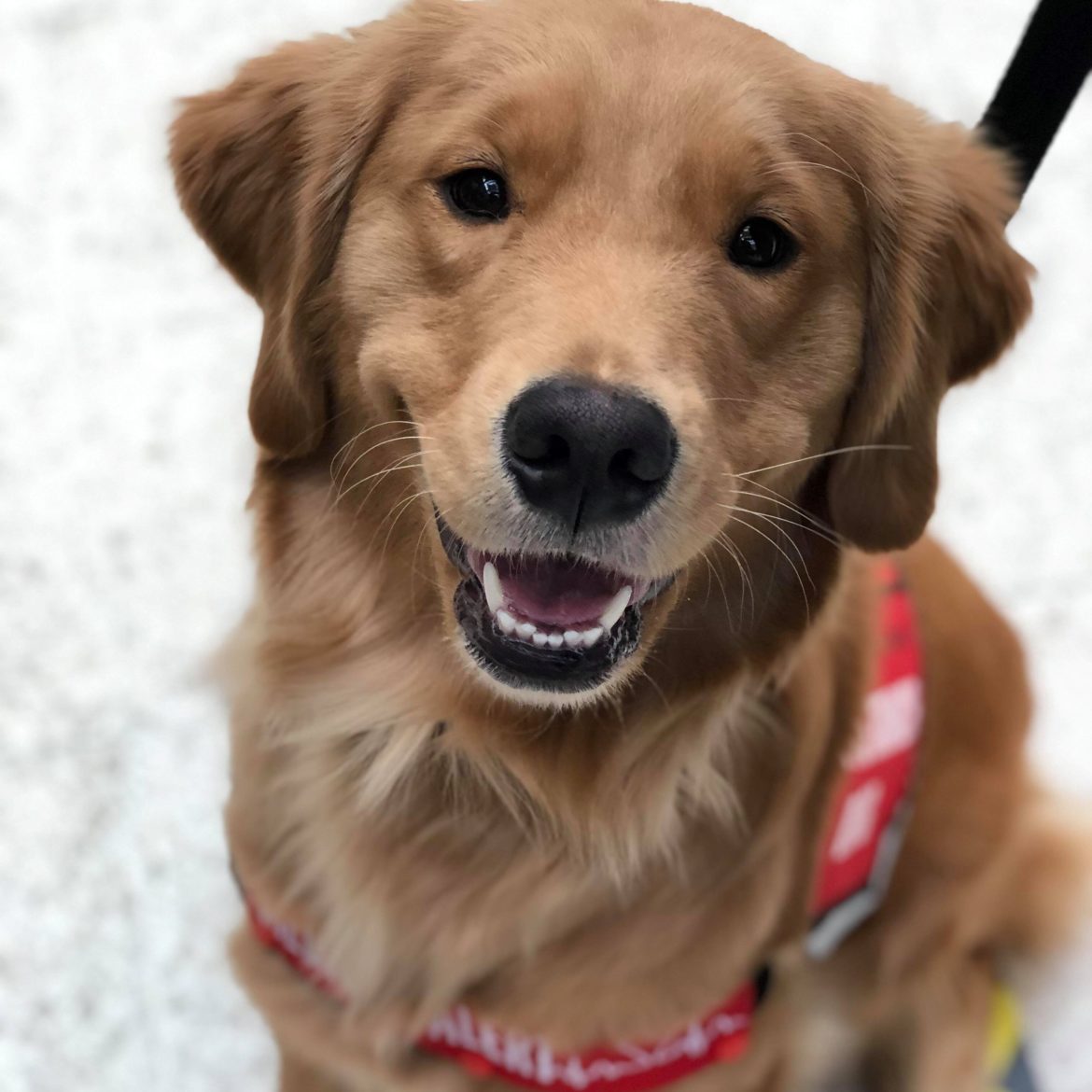 INTRODUCING SPARROW AKA SPICKLE, THE LITTLE ONE

Sparrow is a fairly typical golden retriever in temperament (incredibly friendly, loyal, loves retrieving etc.) but has a…”special” edge to her which makes her both very intense and very popular! She can be incredibly serious and judgemental when she wants to be, but is naturally soppy and human-obsessed.

Born and raised initially in the USA, she was part of a service dog training programme and originally matched with an American girl. I met her when she was just 10 weeks old and doing early socialisation at Disney & Universal Orlando. We bonded immediately and became very close friends with her trainers, which led to me helping them with training, puppy care etc. whenever we were in the US (which is about 4 months of the year). I can’t quite explain the connection we’ve had since day one, or the devastation I felt at knowing she couldn’t be mine.

At 7 months, her trainers concluded that her progress was being stunted by being around her more dominant brother 24/7, so my partner and I cared for her away from him a fair amount on and off which helped her work on some separation anxiety and generally develop her own identity and confidence. She even finally started retrieving (a previously avoided behaviour of hers)! It was soon realised that she didn’t match with her original person and they were unsure she would even make it as a service dog as she seemed to reluctant to work for her.

Through our bond and more work with her, she made a ton of progress, and because of how much she helped me as well, shortly after, it was decided that we would make plans for her to come to be my assistance dog instead. Even though it was a bit of a logistical nightmare, it turned out to be the best thing for everyone – Sparrow thrived with a calmer person (me) and the bond we have with the trainers meant that we could really work together.

Since October 2018, Sparrow has been with me full time, and she moved to the UK in December 2018. She greatly helps me manage my physical and mental health issues, doing tasks including anxiety interruptions, panic attack response, absence alerts, collapsing response, DPT, picking up items and getting me out of crowds. She even began natural heart rate alerts which we are now shaping. She continues to learn new things with me, in order to provide the mental stimulation she needs and also to adapt to my frequently changeable conditions.

We go back and forth to the US still to see her brother & trainers/our friends and top up her training. We spend a lot of time at Disney World where she loves meeting the characters, watching the Lion King show and even going on some rides. She even ended up on the news when she met Chewbacca because of how much she loved him! She has since met him again, and he was as excited to see her as she was to visit him!

She has a generally calm temperament on the surface but she has her crazy golden times with zoomies and is most definitely still a pup when at home/not working. Her default position at home is on her back in an awkward stretch, with her favourite dinosaur toy by her, followed by noticing her tail and spending ages wriggling around with it in her mouth… or squished, asleep in the arms of my partner.

Sparrow is often described by people who meet her as “the softest dog I’ve ever touched”, “the smiliest dog I’ve ever seen”, “the cutest dog ever”  and “a kind soul” thanks to her generally happy looking face and soulful eyes (and incredibly soft fur!) She is eager to please, cuddly and loves attention. Which can be a little issue, as she is slightly demanding with her attention-seeking!

She does experience other difficulties in training too, one of which is her love of people – she is inclined to think that everyone wants to be her friend, so we have to continuously work on her impulse control with this. I also work on things with her off-leash a lot of the time (aside from in public access situations) so that she learns to look to me for cues but also to regulate her own behaviour and to make the choices based on our bond and what she has learnt. I also have to work hard with her to ensure she is confident and independent – she is instinctively more cautious than many other dogs and often needs encouragement and demonstration for her to feel confident enough to try new things.

Despite her struggles, she has come such a long way and every time I see her retrieve something, I remember the importance of not writing off a dog and how valuable the bond between human and dog is (especially with an assistance dog). The amount of things she can now do amazes me and I am so proud of her. As she is now 2, I look forward to her increasing maturity and settling into working, and spending lots of time with her.