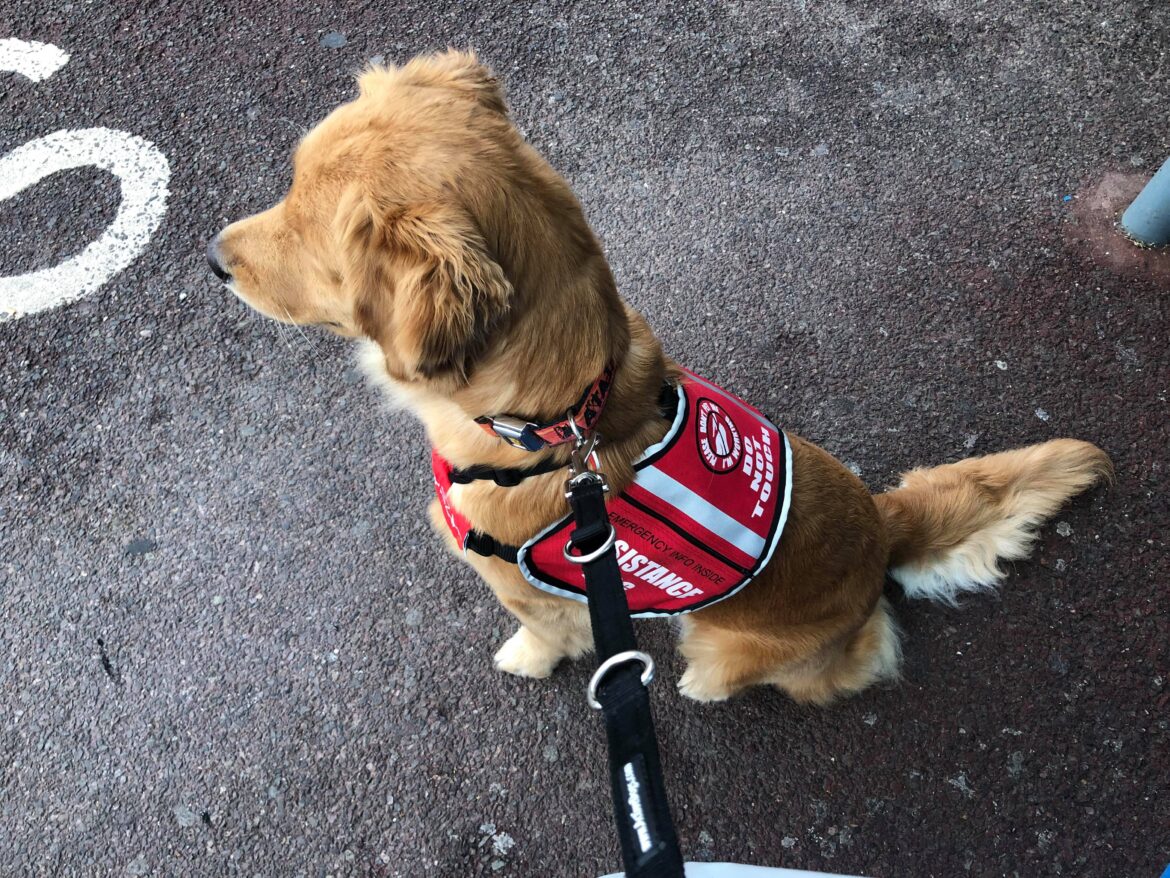 READING YOUR DOG’S SIGNALS IS AN IMPORTANT ASPECT OF ANY DOG OWNERSHIP, BUT ESPECIALLY WHEN YOU ARE ASKING MORE OF THEM, AS YOU DO WHEN THEY ARE AN ASSISTANCE DOG. WE DISCUSS COMMON SIGNALS AND WHAT THEY CAN INDICATE

Every dog is different and one signal can have multiple meanings, even within a single dog. But it is by reading several different signals at once that we are able to begin to understand what our dogs are telling us…as far as possible. And this can help us to build and develop a strong bond.

It is so important to read your dog’s signals – for pet and assistance dogs alike. After all, they can’t speak our language and often their barks are not the best indicator – they actually give us much more information through their body language than audible indicators. Dog ownership is a two-way street, so for it to be a healthy, safe and happy partnership it is essential that don’t just expect them to do what we want. We need to identify, pay attention to and respect our dog’s cues and communication.

When training with a dog, they may use stress signals to communicate that they are apprehensive and nervous about trying something and we need to see this and adjust our approach to training. In another situation, recognising early signs of distress, fear or aggression and reducing the stressors on the dog, could prevent them feeling the need to escalate towards a snap or a bite. If we know what our dog is trying to say we can adjust how we react and adapt the situation.

It is important to recognise and observe our dogs’ behaviour and body language with both humans and other dogs, especially when you first are getting to know to your dog or in any new situation. Particularly when you’re out and about, you may encounter other dogs that may not have the manners to behave appropriately. You may need to assess whether a situation with another dog (e.g. at a dog park) is at risk of escalating and potentially step in and advocate for your dog or diffuse the situation.

It is one thing to say that you need to read your dog’s signals, but it is another to know what to look for. There are several key areas of the dog’s body which communicate the most and these are the best areas to watch to understand your dog.

Eyes: dogs will often fix their stare as a way of being threatening and dominant, whereas they will avert their gaze if they are trying to diffuse a situation and appease an adversary. When dogs show whale eyes (half moon/the whites of their eyes) they are giving a warning, communicating something is wrong. For some dogs this is more of a stress “Oh no” communication (common in Assistance Dogs), whereas for others it is a definite warning to give space and stop whatever is happening. If you don’t know for sure that your dog is communicating something specific, take this as a warning and give them space.

Ears: dogs will automatically prick their ears up in the direction of a sound and communicate that they are alert or ready – this is natural. They also often put their ears forward which tends to communicate eagerness and interest. Many dogs will put their ears back as part of a yawn which is often a stress signal, or they may pin their ears back and down as a submissive, fearful stance. However ear movement can be very nuanced and dog-specific especially if you have a breed whose ears stand up naturally. (See image below)

Mouth: stress licking and yawning are very common stress signals in dogs as it helps them diffuse anxiety and fear, but when training it can communicate things like confusion and uncertainty of what you want from them. Although panting is also associated with being hot and out of breath, it can indicate overexcitement or stress. Similar to humans, when a dog clenches their jaw with their mouth shut tightly it is often a sign of tension. A dog baring their teeth, curling their lip, snarling or growling are all more obvious ways of them communicating that they want the person or dog approaching them to back off. However a lot of the time you will also see a dog’s teeth (and licking) during play and high energy activities due to panting so seeing a dog’s teeth

Head: dogs often bow their heads to look away from another dog to show they mean no harm, but they may also shrink or duck their head away from being petted by a human as it feels overbearing and intimidating (having a big hand over your face is understandably too much for a lot of dogs). On the other hand, a dog may lift their face towards a human hand to receive attention and offer it up for pets/scratches etc. When dogs are being guided by their nose, their head will obviously follow – a common example of this is when a dog has their head bowed to the ground with their nose glued to the floor as they follow a scent trail.

Tail: although a wagging tail can mean a happy dog, it is a lot more nuanced than this – it can also mean anything from excitement, interest and engagement to intense focus and even potential aggression. The position the tail is held in along with the speed of the wag and the rest of the dog’s body position can change the meaning of a dog’s tail wag. Also the way a dog changes between one tail position or movement to another can communicate to another dog how they feel in a situation. One general rule is that a tucked tail between the legs tends to communicate that a dog is scared or timid and is trying to show they mean no harm (it is a survival tactic).

Full Body: most of the time, it is a combination of signs in different parts of the body that give you the best insight into a dog’s state. For example, on a walk you may see them suddenly become incredibly alert, with their body tensed and still, eyes focused, ears forward – they have likely spotted something (see image above). Actions like a play bow (communicating they want to play and are friendly), and a full body shake (to shake off excess energy and stress), are ways of a dog communicating through his full body. Another example is when a dog’s whole body is wiggling, they are likely very excited. A dog may tremble if really terrified (e.g. due to sounds like fireworks or storms) however they may also be trembling due to being very cold/wet so context plays a massive part in understanding a dog’s behaviour.

Although the above are generally universal ways of dogs communicate there is still variation between dogs. For a start, some breeds have different positions of ears and tails based on their natural stance. Even within a breed, individual dogs communicate in different ways to others. This is why you need to get to know the dog in front of you and work with that rather than a template of a typical dog.

For example, I know that whale eyes in Sparrow are part of her responses and alerts to me, whereas yawning and licking her lips mid training is often her way of communicating that she is not sure what I want from her. Similarly she shakes her whole body off when she stands up after lying down under a table/seat for a while – this is something I have encouraged but paired with a command so there is some control over the timing of it; whereas if she shakes her whole body mid play I know she is getting rid of excess energy and if she does it during training she is getting frustrated so I need to adapt how I proceed.

Some dogs are prone to panting a lot, whereas others only ever pant when hot or stressed – it is difficult to determine that someone else’s dog is stressed unless you look at the whole dog. If the dog is stressed, they are likely to be showing multiple signs at once or in a chain. Equally, there is a difference between mild stress e.g. in confusion during training versus severe acute stress when a dog’s space is being invaded. They take different paths – one is likely to progress towards disengagement from a training session, and the other risks progressing towards a bite.

Recognising early signs of discomfort in a situation is absolutely essential – especially when you are putting your dog in a situation with other animals, strangers or children. Doing so and adjusting the situation can prevent the dog needing to escalate the situation themselves which can lead to a bite. A dog very rarely bites without previous signs that they are on their way to reaching their limit, we just need to look for it.

There is a common issue with people thinking a video showing interactions between babies climbing on/cuddling dogs are “cute” but worryingly often in those very videos the dog is clearly communicating it is not comfortable with this. More often than not it is that their space is being invaded. The more we can identify that our dogs are not comfortable at an early stage, the less likely it is that they feel they have to do more to communicate it e.g. snarling, growling, snapping, biting.

It is essential that children are supervised around dog as well as being taught to give dogs space and recognise ways that the dog is communicating it has had enough. Equally, it involves training the dog how to diffuse a situation without needing to escalate it. An open crate can be useful in this situation as it gives the dog somewhere safe to retreat if it feels overwhelmed.

So whether it is to help you with your training or to make sure everyone is safe and content, or to strengthen your bond with your dog, paying attention to your dog’s signals is an integral part of dog ownership.

As they say, knowledge is power!