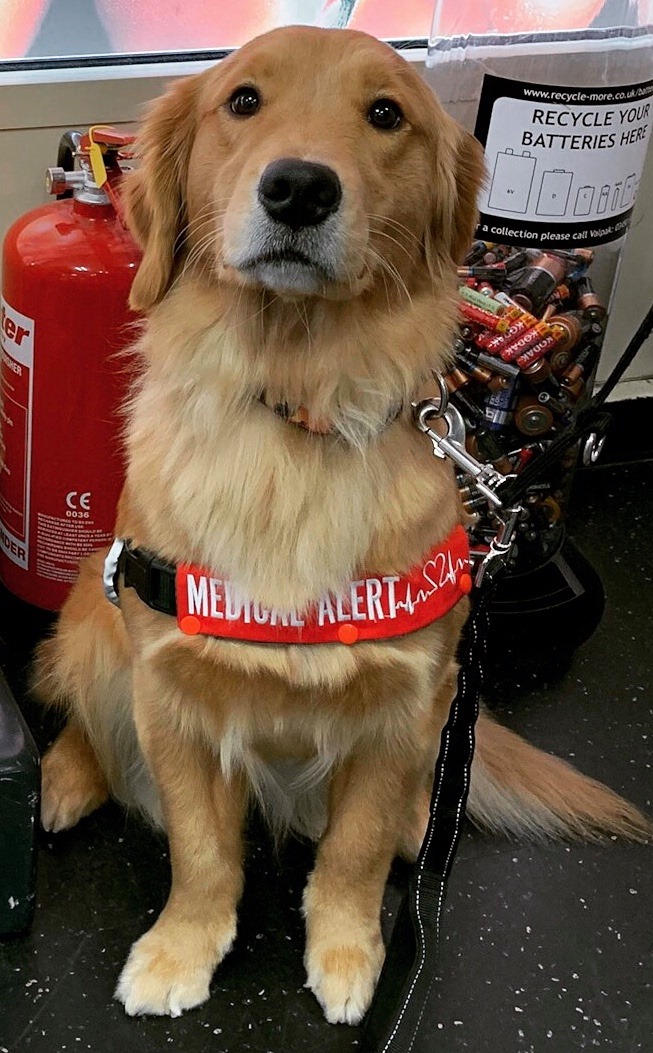 YOU MAY HAVE SEEN DOGS MARKED AS “SEIZURE ALERT”, “DIABETIC ALERT” OR “CARDIAC ALERT”, OR YOU MAY HAVE HEARD OF “MEDICAL DETECTION DOGS”. FIND OUT MORE ABOUT ASSISTANCE DOG ALERTS

In assistance dog work, an alert is when the dog informs their handler of an impending health incident or of the presence of an allergen before it is evident to the human. This is generally thought to be based on scent-work (although there is limited research), with the dogs detecting the scent of the hormonal change in the handler or the scent of the allergen in their surroundings before the human could, and communicating it with them through a trained behaviour so they can act appropriately. Illnesses where assistance dog alerts are commonly used include epilepsy (seizure alert), diabetes (hypoglycemic or high sugar alert), cardiac conditions (e.g. POTS), autoimmune issues (like MCAS), and severe allergies (e.g. where anaphylaxis is possible from just breathing the same air as the allergen).

Assistance Dog teams have a variety of different types of alert behaviour, but the shared feature of alerts is that they get your attention when other behaviours may not. For Dory Adelie and Sparrow, the alert for high heart rate was built on the foundation of Sparrow’s natural behaviour in the situation which is to show “whale eyes” (the whites of her eyes) and stare. So that is her first step, and if this is ignored then Sparrow will begin forcefully nudging Dory’s legs and arms. If this doesn’t work, then she will jump up repeatedly. This is the only time where jumping up is an accepted behaviour for Sparrow when working/vested and it is a very clear escalation. The fact it is a highly undesirable behaviour means that Dory pays attention immediately and aims to find out the cause/do the required safe action as soon as possible. In this case, it is usually checking her heart rate on her watch to confirm it and then sitting down to prevent fainting or falling. In this picture, Sparrow has started to relax as handler Dory is now “managing it” by checking her heart rate – previous to this, Sparrow was staring with whale eyes when she first jumped up.

There is a lot of debate about whether alerts can be taught or not. Some say that they can be taught by capturing scent samples (often saliva samples) and training an action associated with this scent (the alert). Others say that this isn’t possible, and that alerts can only be shaped from a natural instinct. The jury is still out on this and sources can’t agree on exactly what it is that happens or why some dogs are more aware of it than others. But it is a known fact that dogs have extremely sensitive noses (in fact they are thought to have 50 times more olfactory receptors in their nose than a human, and 10,000 times better sense of smell) which explains why they can smell things humans can’t detect. Due to the highly specialised nature of the work, it is a small percentage of situations where a handler can fully rely 100% on their dog’s alerts with no other support or equipment and no plans in place for responses further along the line in a medical incident. It is recommended that if you think your dog might be naturally alerting to you, you track your symptoms/incidents that you would want alerts for and separately track your dog’s behaviours and see if any anomalies stand out and overlap. It is hard, but try to be objective – maybe get someone else to observe your dog’s behaviour or check the two trackers.

When Alerting is Actually Responding

Alerts are often confused with responses and some say their dog is alerting when they mean responding. These are two distinct tasks for Assistance Dogs and are cued by a different signal BUT they can be done in tandem. Essentially, alerts are letting you know about something that you are not aware of. In medical conditions, this might be before you become fully symptomatic but it is not before you have symptoms at all (you are just not aware of them). The dog does technically “respond” to the signal (a scent) by performing a trained response task, so it is often called “alert and response”. A response on its own is generally when the dog identifies a behaviour (the signal in this case) and performs a trained task to counteract it (e.g. nudging a person’s hands who is scratching themselves to disrupt the behaviour, or pawing at a person’s leg if they start swaying when standing to get them to sit down). A response is usually not cued by a command from their handler (vs. in a generic retrieval task). But a response can be on command, and/or directed/guided by the handler – for example with DPT (Deep Pressure Therapy). In the case of alert & response together, it is often a reaction to a behaviour you are not aware that you are doing (e.g. anxiety leg shaking) – something visible that they have been trained to notice and respond to, thereby letting you know (i.e. alerting you).
That doesn’t mean a response is inferior to an alert. It just means that it is a different, trained task. It can be confusing, especially when an Assistance Dog may perform both a medical alert and a response for the same condition. For example, they may perform an alert for high heart rate in POTS before the handler is obviously symptomatic, or they may perform a response when the handler is showing signs of lightheadedness and pre-syncope, like swaying or staggering. Find out more about the distinction between alerting and responding and why it really doesn’t matter to the handler themselves here.

Dangers and Issues with Alerting

There has been a noticeable trend of younger and younger dogs supposedly “alerting”. This is a concern, as puppies need to be allowed to be dogs without the stress of needing to constantly be alert and aware of the human’s behaviour and scents. Young puppies shouldn’t even be doing taskwork as they need to work slowly on the foundations and obedience before expanding their training into more complex and demanding work as they age and mature.

There is also the risk of some people taking advantage of the type of behaviours involved in an alert (e.g. jumping up, barking) and using it as an excuse for poor training, especially in the owner trained AD world. Alerts must be proofed and alert behaviours must not be reinforced if they are not done in response to an actual health incident, otherwise the dog may well end up doing them for attention or in boredom. It is important to notice the difference between attention seeking behaviour or acting up, versus an alert. There are often subtle signs from the dog – for example, Sparrow tends to have her ears back and showing “whale eyes” when it is an alert, whereas her ears would be forward and her eyes excited if she was acting up. She also dislikes being told off so she is rarely stubborn when it comes to following a command. If she has been told to lay down but is repeatedly getting up with whale eyes and leaning her chin on her handler, it is usually a sign that this is an alert rather than her acting up.

While it is generally accepted that many dogs are not cut out for medical detection work, this doesn’t mean they cannot be of great assistance to the handler, even helping them with the same condition! A dog who performs alert & response together, or purely response work, can be life-changing and even life-saving for someone. Some of the best trained assistance dogs don’t perform alerts but that doesn’t mean they are less of an assistance dog. Their tasks are just as valuable and they can have just as much of a positive impact on their handler’s life.